Hospital capacity is only one way to measure the success of a health system.

As omicron sweeps across North America, the responses from the United States and Canada could not be more different. US states are widely open for business, while Canada’s largest provinces are closing their doors.

Part of the difference comes down to the arithmetic: America’s healthcare system, which prioritizes free markets, provides more hospital beds per capita than the government-dominated Canadian system.

“I am not defending this market-driven American system,” said Bob Bell, a physician who led Ontario’s health bureaucracy from 2014 to 2018 and who previously oversaw the University of Toronto Health Network. “But I am saying that in Canada we have excessively restricted hospital capacity.”

The consequences are felt throughout the economy. In Ontario, restaurants, concert halls and gymnasiums are closed while Quebec imposes a 10 p.m. curfew and prohibits in-person religious services. British Columbia has suspended indoor weddings and funeral receptions. 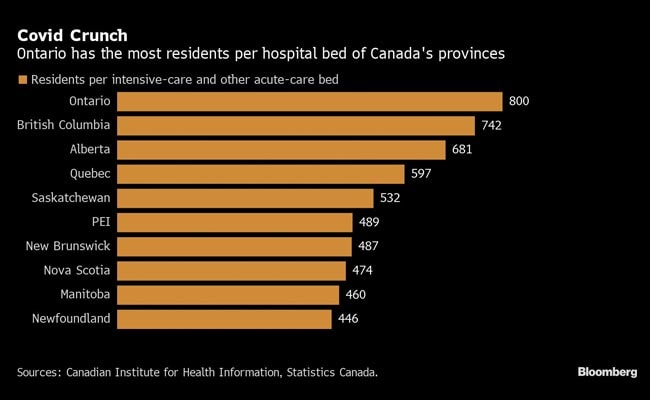 Of course, hospital capacity is only one way to measure the success of a health system. Overall, Canadians have better access to health care, live longer than Americans, and rarely go bankrupt because of medical bills. Canada’s death rate from Covid-19 is a third of the rate in the United States, a reflection of the more widespread use of health restrictions in Canada and its collectivist approach to health care.

Yet the pandemic has revealed a compromise Canada is making with its universal system: its hospitals are less able to handle a wave of patients.

The situation is particularly dire in Ontario. Nationally, Canada has less hospital capacity than the United States, as a proportion of the population. But even among Canadian provinces, Ontario is doing the worst. It had one intensive care or acute care bed per 800 residents in April 2019, the latest period for which data is available, according to the Canadian Institute for Health Information. Over the same period, the average ratio in the rest of Canada was around one bed per 570 residents. (New York State has approximately one hospital bed for every 420 residents.)

This leaves the province’s health system in a precarious position whenever a new wave of Covid-19 arrives.

“Math is not on our side,” Ontario Premier Doug Ford said on Monday as he announced the closure of new schools and businesses this week to ease pressure on hospitals in the province. The province has nearly 2,300 people hospitalized with Covid-19.

On Wednesday, after the Brampton Civic Hospital in suburban Toronto declared an emergency due to a shortage of beds and workers, Brampton Mayor Patrick Brown tweeted: “We need a national conversation on insufficient health care capacity and personnel. 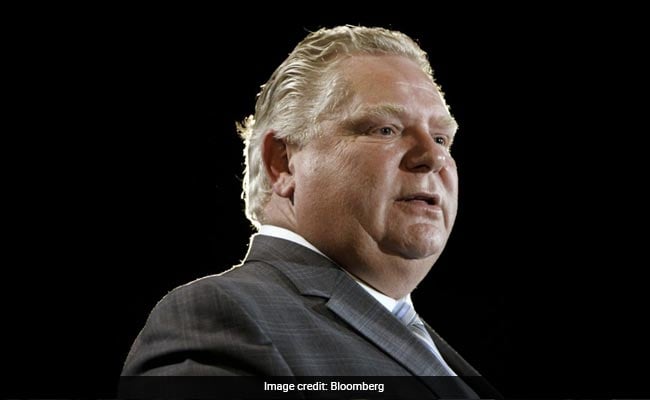 Doug Ford, Premier of Ontario, speaks during an event at the Economic Club of Canada in Toronto, Ontario, Canada, Monday, January 21, 2019. Ford, a Conservative, was elected Premier in June 2018.

The biggest bottleneck in the system is the personnel required for acute care, especially in emergency departments and intensive care units, Bell said. The staff crisis becomes extreme during waves of Covid when large numbers of employees are forced to self-isolate at home due to infection or exposure.

“We haven’t done an adequate job of building the capacity that will meet the needs of Ontarians,” said Bell. “There is simply no surge capacity available.”

Stephen Archer, head of the Department of Medicine at Queen’s University in Kingston, Ont., About three hours east of Toronto, has spent two decades working in hospitals in Minneapolis and Chicago. He said he strongly believes that the Canadian system is better and provides more equitable care.

Still, he called it “embarrassing” to see hospitals in Toronto having to transfer patients infected with the virus to smaller hospitals in the province, as happened last year. The Kingston Health Sciences Center, where he works, received more than 100 Covid patients from Toronto earlier in the pandemic, which was not surprising, Archer said, as hospitals in Ontario are overwhelmed even by a season. influenza loaded.

“I think a very fair criticism of the Canadian system and the Ontario system is that we are trying to run our hospitals too close to capacity,” he said. “We couldn’t handle mild seasonal illnesses like the flu, so we were in a bad position to deal with Covid-19. “ Beyond hospital capacity, Archer and Bell cited other reasons for the disparity in how the United States and Canada are responding to new epidemics. Canadians have more confidence in their government to act for the broader collective good, and they will not tolerate the level of death and serious illness America has endured from Covid, they said.

David Naylor, physician and former president of the University of Toronto who led a federal review of Canada’s response to the 2003 SARS outbreak, said hospital capacity likely plays a bigger role in decision-making in Canada than in the United States because Canada’s universal system means “the well-being of the entire population is affected if the capacity for care is destabilized.”

But he also argued that focusing only on hospital capacity could be misleading. “Canada and the United States have less capacity than many European countries,” he wrote via email.

The main difference between the two countries’ responses to Covid epidemics is cultural, argues Naylor. In Canada, more than in the United States, politics is guided by a “collectivist ethos” that tolerates prolonged shutdowns and other public health restrictions to keep hospitals from collapsing.

“America’s results are almost inexplicable given the scientific and medical firepower of the United States,” Naylor said. “With regret, I must say that America’s drastic underperformance in protecting its citizens from viral disease and death is a symptom of a deeper political unrest in their federation.”

(Except for the title, this story was not edited by NDTV staff and is posted from a syndicated feed.)